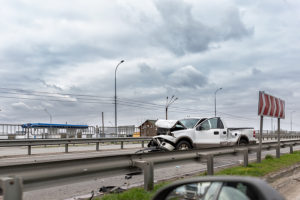 For many of us, driving on California’s roads is a daily necessity. Every day, we join countless other drivers as we commute to work, take the kids to school, run errands, and go about our daily lives. With so many cars on California’s busy roads and highways, road rage has become more commonplace, and the results are devastating.

Road rage is a catch-all term to describe hostile conduct by a motorist. Road rage comes in many forms, from shouting insults or threats of violence to unsafe driving meant to intimidate others on the road. Road rage makes California roads less safe for everyone, and road rage incidents often lead to car accidents that result in serious injury.

A passenger in a car traveling on a Southern California freeway managed to capture an incident of road rage between a motorcyclist and a motor vehicle driver that caused a chain-reaction crash that ended in tragedy. The video, published by NBC4 News in Los Angeles, serves as a stark reminder of why road rage has no place on California’s highways.

The video begins right after a car cut off a motorcyclist during a lane change. In response, the motorcyclist pulls up next to the car and kicks the door. In retaliation, the car’s driver swerves toward the motorcyclist, nearly crashing into him. Instead of crashing into the bike, the car hits the median, bounces back through lanes of traffic, and crashes into a pickup, and the motorcyclist drives away without injury. The only injured victim in this accident was the pickup driver, who found himself in the wrong place at the wrong time.

According to a report by Bankrate, nearly 80% of drivers say that they have experienced road rage while driving, while 78% admit to engaging in aggressive behaviors on America’s roadways. The most recent data show that road rage more often affects those individuals who spend a lot of time on the road, with traffic congestion often cited as a leading factor in incidents of aggressive driving. That means that commuters are at the most risk.

While you cannot control the behavior of other drivers on the road, there are certain steps that you can take when driving that will help you avoid being a victim.

The best way to avoid road rage is always to follow the rules of the road and remain courteous, which includes the following:

While driving on California’s roadways can be frustrating, road rage is risky, dangerous, and never the right answer.

Sometimes, no matter how careful we are on the road, we can become innocent victims due to someone else’s road rage.

A road rage accident is no different than any other accident. You need to take the following steps:

Can I Sue for Road Rage in California?

If you or someone you love was injured in a California road rage accident, you have a right to sue the aggressive driver that caused the accident. A road rage lawsuit is no different than any other personal injury claim related to a car accident. If you or a loved one were injured due to another driver’s negligence, you might be entitled to compensation.

The legal team at the Law Offices of Samer Habbas is dedicated to helping California road rage accident victims get the compensation they deserve.

If you or a loved one has been injured in a motor vehicle accident involving road rage, our experienced Los Angeles car accident attorneys are available to personally review your case. Call us at 1-619-626-2143 to schedule a free, complimentary consultation with our legal team today.